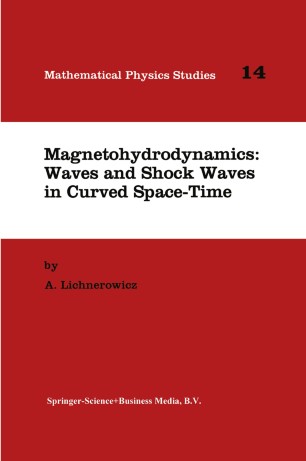 For seventy years, we have known that Einstein's theory is essentially a theory of propagation of waves for the gravitational field. Confusion enters, however, through the fact that the word wave, in physics, implies sometimes repetition and sometimes not. This confusion is often increased by he use of Fourier transforms, by which a disturbanse which appears to be without repetition is resolved into periodic wave-trains with all frequencies. But, in a general curved space-time, we have nothing corresponding to Fourier transforms. Here, we consider systematically waves corresponding to the propagation of discontinuities of physical quantities describing either fields (essentially electromagnetic fields and gravitational field), or the motion of a fluid, or together, in magnetohydrodynamics, the changes in time of a field and of a fluid. The main equations, for the different studied phenomena, constitute a hyperbolic system and the study of a formal Cauchy problem is possible. We call ordinary waves the case in which the derivative of superior order appearing in the system are discontinuous at the traverse of a hypersurface, the wave front ; we call shock waves the case where the derivatives of an order inferior by one are discontinuous at the traverse of a wave front. XI xii PREFACE From 1950, many well-known scientits (Taub, Synge, Choquet-B ruhat, etc.) have studied the corresponding equations for different physical phenomena : systems associated to the electromagnetic and gravitational fields, to hydrodynamics and to magnetohydrodynamics.