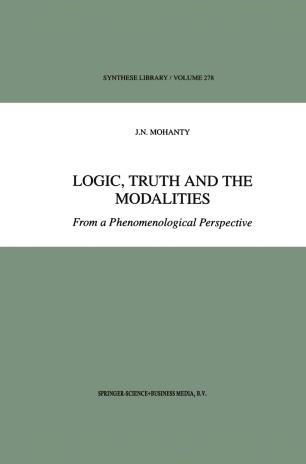 Logic, Truth and the Modalities

From a Phenomenological Perspective

This volume is a collection of my essays on philosophy of logic from a phenomenological perspective. They deal with the four kinds of logic I have been concerned with: formal logic, transcendental logic, speculative logic and hermeneutic logic. Of these, only one, the essay on Hegel, touches upon 'speculative logic', and two, those on Heidegger and Konig, are concerned with hermeneutic logic. The rest have to do with Husser! and Kant. I have not tried to show that the four logics are compatible. I believe, they are--once they are given a phenomenological underpinning. The original plan of writing an Introduction in which the issues would have to be formulated, developed and brought together, was abandoned in favor of writing an Introductory Essay on the 'origin'- in the phenomenological sense -of logic. J.N.M. Philadelphia INTRODUCTION: THE ORIGIN OF LOGIC The question of the origin of logic may pertain to historical origin (When did it all begin? Who founded the science of logic?), psychological origin (When, in the course of its mental development, does the child learn logical operations?), cultural origin (What cultural - theological, metaphysical and linguisti- conditions make such a discipline as logic possible?), or transcendental­ constitutive origin (What sorts of acts and/or practices make logic possible?).