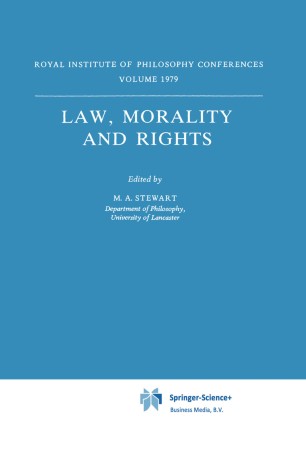 The Royal Institute of Philosophy has been sponsoring conferences in alternate years since 1969. These have from the start been intended to be of interest to persons who are not philosophers by profession. They have mainly focused on interdisciplinary areas such as the philosophies of psychology, education and the social sciences. The volumes arising from these conferences have in­ cluded discussions between philosophers and distinguished prac­ titioners of other disciplines relevant to the chosen topic. Beginning with the 1979 conference on 'Law, Morality and Rights' and the 1981 conference on 'Space, Time and Causality' these volumes are now constituted as a series. It is hoped that this series will contribute to advancing philosophical understanding at the frontiers of philosophy and areas of interest to non-philos­ ophers. It is hoped that it will do so by writing which reduces technicalities as much as the subject-matter permits. In this way the series is intended to demonstrate that philosophy can be clear and worthwhile in itself and at the same time relevant to the interests of lay people.