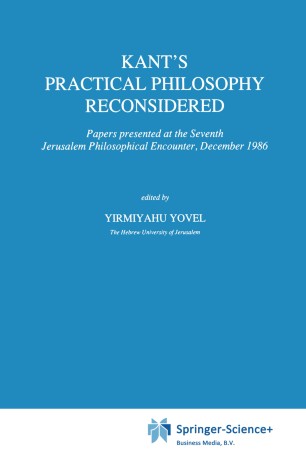 That Kant's ideas remain vitally present in ethical thinking today is as impossible to deny as it is to overlook their less persisting aspects and sometimes outdated idiom. The essays in this volume attempt to reassess some crucial questions in Kant's practical philosophy both by sketching the lines for new systematic interpretations and by examining how Kantian themes apply to contemporary moral concerns. In the previous decade, when Kant was primarily read as an answer to utilitarianism, emphasis was mainly laid on the fundamentals of his moral theory, stressing such concepts as universalization, duty for its own sake, personal autonomy, unconditional imperatives or humanity as end-in-itself, using the Groundwork and its broader (ifless popular) systematic parallel, the Analytic of the Critique of Practical Reason, as main sources. In recent years, however, emphasis has shifted and become diversified. The present essays reflect this diversification in discussing the extension of Kantian ethics in the domains of law, justice, politics and moral history, and also in considering such meta-philosophical questions as the relation between the various "inter­ ests of reason" (as Kant calls them), above all between knowledge and moral practice. The papers were first presented at the Seventh Jerusalem Philosophical Encounter, held at the Hebrew University of Jerusalem in December 1986. The Jerusalem Philosophical Encounters are a series of bi-annual international symposia, in which philosophers of different backgrounds meet in Jerusalem to discuss a common issue. Organized by the S. H.