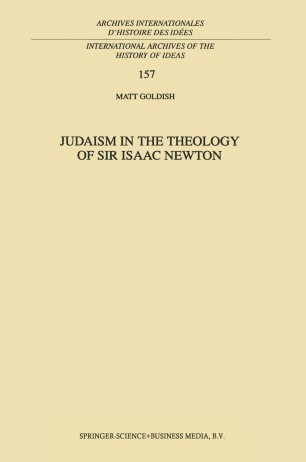 Judaism in the Theology of Sir Isaac Newton

This book is based on my doctoral dissertation from the Hebrew University of Jerusalem (1996) of the same title. As a master's student, working on an entirely different project, I was well aware that many of Newton's theological manuscripts were located in our own Jewish National and University Library, but I was under the mistaken assumption that scores of highly qualified scholars must be assiduously scouring them and publishing their results. It never occurred to me to look at them at all until, having fmished my master's, I spoke to Professor David Katz at Tel-Aviv University about an idea I had for doctoral research. Professor Katz informed me that the project I had suggested was one which he himself had just fmished, but that I might be interested in working on the famous Newton manuscripts in the context of a project being organized by him, Richard Popkin, James Force, and the late Betty Jo Teeter Dobbs, to study and publish Newton's theological material. I asked him whether he was not sending me into the shark-infested waters of highly competitive scholarship, and learned that in fact there were only a handful of scholars in the world who actively studied and published on Newton's theology. At the time the group consisted mainly of Popkin, Force, Dobbs, Frank Manuel, Kenneth Knoespel, and David Castillejo.