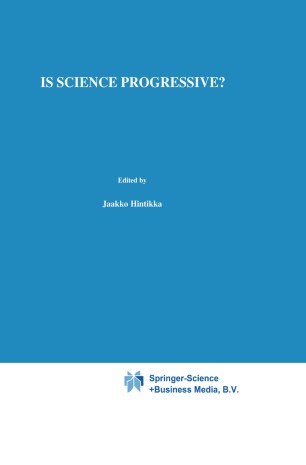 This collection brings together several essays which have been written between the years 197 5 and 1983. During that period I have been occupied with the attempt to find a satisfactory explicate for the notion of tnithlike­ ness or verisimilitude. The technical results of this search have partly appeared elsewhere, and I am also working on a systematic presentation of them in a companion volume to this book: Truthlikeness (forthcoming hopefully in 1985). The essays collected in this book are less formal and more philos­ ophical: they all explore various aspects of the idea that progress in science is associated with an increase in the truthlikeness of its results. Even though they do not exhaust the problem area of scientific change, together they constitute a step in the direction which I find most promising in the defence of critical scientific realism. * Chapter 1 appeared originally in Finnish as the opening article of a new journal Tiede 2000 (no. 1 I 1980) - a Finnish counterpart to journals such as Science and Scientific American. This explains its programmatic character. It tries to give a compact answer to the question 'What is science?', and serves therefore as an introduction to the problem area of the later chapters. Chapter 2 is a revised translation of my inaugural lecture for the chair of Theoretical Philosophy in the University of Helsinki on April 8, 1981. It appeared in Finnish inParnasso 31 (1981), pp.