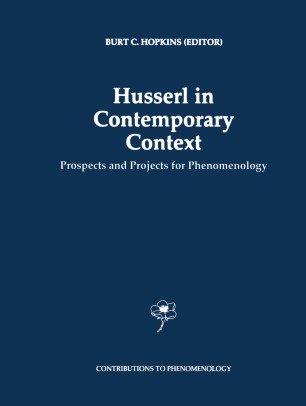 Prospects and Projects for Phenomenology

Part of the Contributions to Phenomenology book series (CTPH, volume 26)

James F. Sheridan Allegheny College As we come to the end of the century, an attentive student of con­ temporary European philosophy will no doubt be startled by a volume titled Husserl in Contemporary Context. Such philosophers are most likely to believe that Hussed has now been declared II classical" rather than a contemporary thinker or, worse, simply old fashioned. Access to Hussed today will most likely come through the allegedly definitive critiques of his work by Heidegger and Derrida and to a lesser extent through the readings of his work by Levinas and Merleau­ Ponty although Merleau-Ponty himself has been declared old fashioned by some postmodems. Hence, if by II contemporary" one understands the problematic set by the work of the late Heidegger, Derrida, Foucault, et. al., Hussed's work seems strange indeed in such a contemporary context, seems better understood as the last gasp of philosophy dominated by metaphysics and thus fit only for inclusion in courses in the history of philosophy.