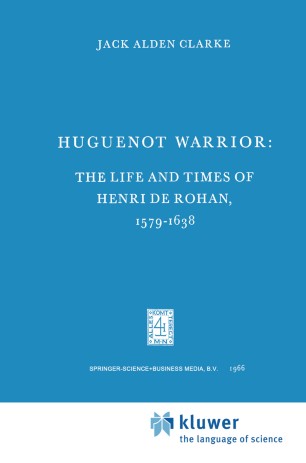 The purpose of this book is to describe the Duke of Rohan's role as a political leader of the Huguenot party from 1621 to 1629 placing somewhat less emphasis on his military achievements. It makes no claim to biographical completeness. The narrative is based on con­ temporary books and pamphlets and on manuscripts in the Biblio­ theque nation ale, the British Museum, and the Public Record Office. Research was also done at the Newberry Library, the Library of Congress, and at the University of Wisconsin's Memorial Library, notably in its Montauban, Tank, and French Pamphlet collections. In the preparation of this book I have received advice and assistance from many people. Personal thanks are due to William P. Kaldis, Jack Ray Thomas, and Howard S. Miller for reading the manuscript and to my wife Anna for typing several drafts of it. Marguerite Chris­ tensen, reference librarian at the University of Wisconsin, helped me secure a number of rare volumes on interlibrary loan. I would also like to thank Cynthia Kaldis for translating a large number of diplo­ matic letters from Seventeenth century Latin.