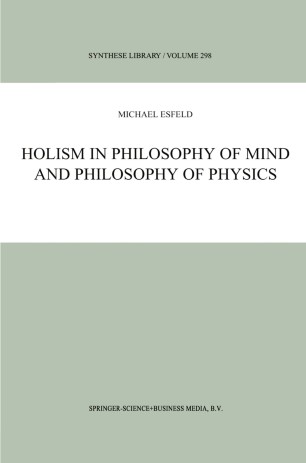 The Scope of the Project The concept of holism is at the centre of far-reaching changes in various areas of philosophy in the second half of the twentieth century. Holism in epistemology and the philosophy of mind is widespread among analytic philosophers subsequent to the work of the later Wittgenstein and to Quine's "Two Dogmas of Empiricism". Roughly speaking, the claim is that (a) for a person to have beliefs, a social, linguistic community is required and that (b) single beliefs have a meaning only within a whole system of beliefs. Furthermore, holism is discussed in science, in particular in the interpretation of quantum physics. In fact, the term "holism" goes back to Smuts (1926), who introduces this term in a biological context. I Holism in any of these areas has considerable consequences for our philosophical view of the world and ourselves. Holism in quantum physics is said to refute atomism, which has been predominant in modem philosophy of nature. Holism in epistemology and the philosophy of mind is seen as an alternative to what is known as the Cartesian tradition, which dominated modem thought down to logical empiricism.