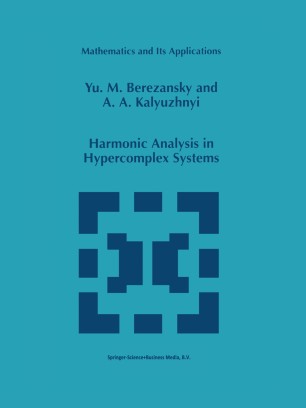 Part of the Mathematics and Its Applications book series (MAIA, volume 434)

First works related to the topics covered in this book belong to J. Delsarte and B. M. Le­ vitan and appeared since 1938. In these works, the families of operators that generalize usual translation operators were investigated and the corresponding harmonic analysis was constructed. Later, starting from 1950, it was noticed that, in such constructions, an important role is played by the fact that the kernels of the corresponding convolutions of functions are nonnegative and by the properties of the normed algebras generated by these convolutions. That was the way the notion of hypercomplex system with continu­ ous basis appeared. A hypercomplex system is a normed algebra of functions on a locally compact space Q-the "basis" of this hypercomplex system. Later, similar objects, hypergroups, were introduced, which have complex-valued measures on Q as elements and convolution defined to be essentially the convolution of functionals and dual to the original convolution (if measures are regarded as functionals on the space of continuous functions on Q). However, until 1991, the time when this book was written in Russian, there were no monographs containing fundamentals of the theory (with an exception of a short section in the book by Yu. M. Berezansky and Yu. G. Kondratiev [BeKo]). The authors wanted to give an introduction to the theory and cover the most important subsequent results and examples.