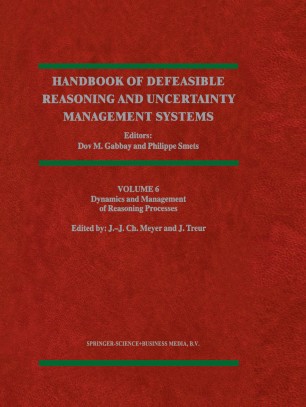 Dynamics and Management of Reasoning Processes

This volume, the 6th volume in the DRUMS Handbook series, is part of the after­ math of the successful ESPRIT project DRUMS (Defeasible Reasoning and Un­ certainty Management Systems) which took place in two stages from 1989-1996. In the second stage (1993-1996) a work package was introduced devoted to the topics Reasoning and Dynamics, covering both the topics of 'Dynamics of Rea­ soning', where reasoning is viewed as a process, and 'Reasoning about Dynamics', which must be understood as pertaining to how both designers of and agents within dynamic systems may reason about these systems. The present volume presents work done in this context. This work has an emphasis on modelling and formal techniques in the investigation of the topic "Reasoning and Dynamics", but it is not mere theory that occupied us. Rather research was aimed at bridging the gap between theory and practice. Therefore also real-life applications of the modelling techniques were considered, and we hope this also shows in this volume, which is focused on the dynamics of reasoning processes. In order to give the book a broader perspective, we have invited a number of well-known researchers outside the project but working on similar topics to contribute as well. We have very pleasant recollections of the project, with its lively workshops and other meetings, with the many sites and researchers involved, both within and outside our own work package.