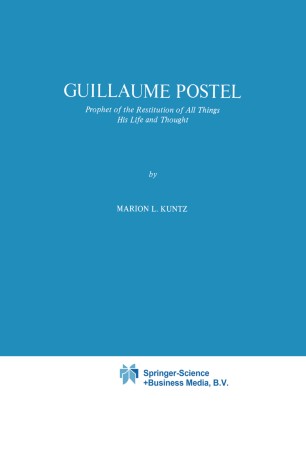 Prophet of the Restitution of All Things His Life and Thought

Gui 11 aume Postel was undoubtedly one of the most remarkab 1 e and interesting scholars and thinkers of the sixteenth century. His know­ ledge of Hebrew and Arabic was rare among his contemporaries, as was his study and use of the Rabbinical, Cabalistic and Islamic literature pre­ served in these languages. His attempt to harmonize Christian, Jewish and Mbhammedan thought give him an important place in the history of re­ ligious tolerance, whereas his prophecies about a universal religion and a universal monarchy seem to anticipate more recent ideas of a world state and of general peace. In his prophecies, Postel assigned a unique role to himself and to a pious 1 ady whom he met in Venice and whom he lavishly praises in all his later writings. Admired and respected by many contemporary scholars and princes in France, Italy and Germany, he also aroused the suspicions of the religious and political authorities of his time who considered him dangerous but mad and thus spared his life, but confined him to a monastery for many years. His numerous writ­ ings survive in rare editions and manuscripts, and the later copies of some of his works show that he continued to be read and to exercise much influence down to the eighteenth century.