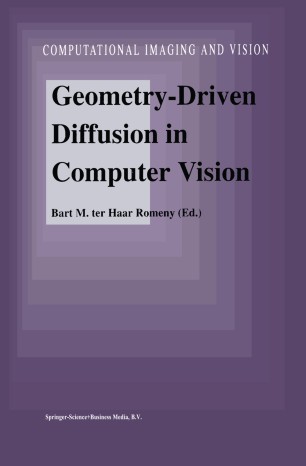 Scale is a concept the antiquity of which can hardly be traced. Certainly the familiar phenomena that accompany sc ale changes in optical patterns are mentioned in the earliest written records. The most obvious topological changes such as the creation or annihilation of details have been a topic to philosophers, artists and later scientists. This appears to of fascination be the case for all cultures from which extensive written records exist. For th instance, chinese 17 c artist manuals remark that "distant faces have no eyes" . The merging of details is also obvious to many authors, e. g. , Lucretius mentions the fact that distant islands look like a single one. The one topo­ logical event that is (to the best of my knowledge) mentioned only late (by th John Ruskin in his "Elements of drawing" of the mid 19 c) is the splitting of a blob on blurring. The change of images on a gradual increase of resolu­ tion has been a recurring theme in the arts (e. g. , the poetic description of the distant armada in Calderon's The Constant Prince) and this "mystery" (as Ruskin calls it) is constantly exploited by painters.