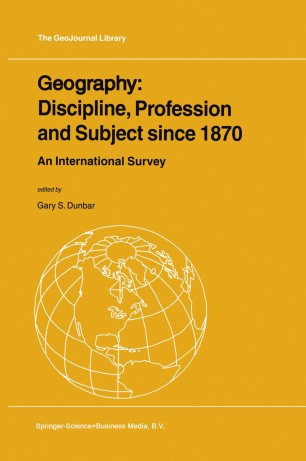 Geography: Discipline, Profession and Subject since 1870

Part of the The GeoJournal Library book series (GEJL, volume 62)

Gary S. Dunbar "Pro-fesh-yon-al-i-zay-shun . . . pro-fesh-yon-al-i-ZAY-shunl . . . I do not think I like that word . . . I am quite certain I do not like that wordl," said A. F. Martin of Oxford University in 1980 when I mentioned to him that I was making a study of the professionalization of geography in Europe and North America from about 1870 to 1930. I should not have been surprised by his reply, because Mr. Martin, a highly regarded lecturer, tutor, and university man, was in some ways a typical example of his generation of British geographers, in that he did not have an advanced degree and his publication record was meager. Except for a single remarkable essay (Martin 1951), he was not well known in the field of geography, at least not outside the United Kingdom. Was he, then, a professional geographer? Yes, indeed, because he was a full-time scholar in a distinguished university, even though he lacked the sort of credentials that have been demanded of subsequent generations of scholars, at Oxford and elsewhere. I certainly do not mean to denigrate Martin or his ilk; I am simply using this anecdote to launch a book on the emergence of modern geography.