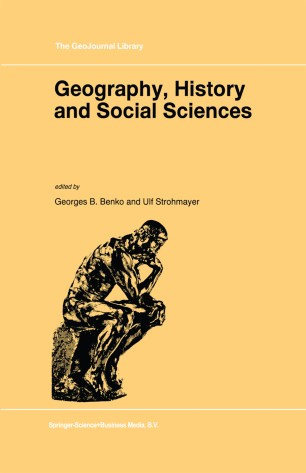 Part of the The GeoJournal Library book series (GEJL, volume 27)

Georges Benko «Societies are much messier than our theories of them» Michael Mann The Sources of Social Power 1 Towards a unified social theory Why are there communication problems between the different disciplines of the social sciences? And why should there be so much misunderstanding? Most probably because the encounter of several disciplines is in fact the encounter of several different histories, and therefore of several different cultures, each interpreting the other according to the code dictated by its own culture. Inevitably geographers view other disciplines through their own cultural filter, and even a benevolent view remains 'ethnocentric'. It was in order to avoid such ethnocentricity that Femand Braudel called for more unity among the social sciences in 1958 : «l wish the social sciences . . . would stop discussing their respective differences so much . . . and instead look for common ground . . . on which to reach their first agreement. Personally I would call these ways : quantification, spatial awareness and 'longue duree'». In its place at the center of the social sciences, geography reduces all social reality to its spatial dimensions. Unfortunately, as a discipline, it considers itself all too often to be in a world of its own. There is a need in France for a figure like Vidal de la Blanche who could refocus attention away from issues of time and space, towards space and social reality. Geographic research will only take a step forward once it learns to address the problems facing all the sciences.