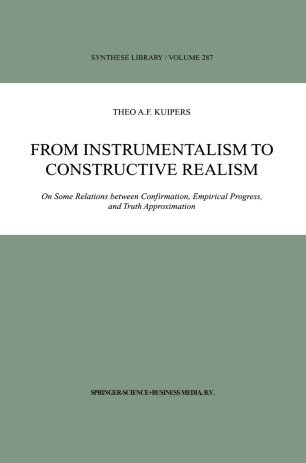 From Instrumentalism to Constructive Realism

On Some Relations between Confirmation, Empirical Progress, and Truth Approximation

Surprisingly, modified versions of the confirmation theory (Carnap and Hempel) and truth approximation theory (Popper) turn out to be smoothly sythesizable. The glue between the two appears to be the instrumentalist methodology, rather than that of the falsificationalist.
The instrumentalist methodology, used in the separate, comparative evaluation of theories in terms of their successes and problems (hence, even if already falsified), provides in theory and practice the straight road to short-term empirical progress in science ( à la Laudan). It is also argued that such progress is also functional for all kinds of truth approximation: observational, referential, and theoretical. This sheds new light on the long-term dynamics of science and hence on the relation between the main epistemological positions, viz., instrumentalism (Toulmin, Laudan), constructive empiricism (Van Fraassen), referential realism (Hacking, Cartwright), and theory realism of a non-essentialist nature (constructive realism à la Popper).
Readership: Open minded philosophers and scientists. The book explains and justifies the scientist's intuition that the debate among philosophers about instrumentalism and realism has almost no practical consequences.

Professor Theo Kuipers is the author of From Instrumentalism to Constructive Realism (Synthese Library 287, 2000). He is the leader of the Groningen Research Group `Cognitive Structures in Knowledge and Knowledge Development', which gained the highest possible scores in two successive assessments of Dutch philosophical research by international committees.