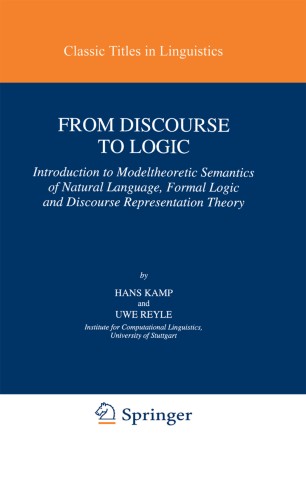 From Discourse to Logic

Part of the Studies in Linguistics and Philosophy book series (SLAP, volume 42)

Preface This book is about semantics and logic. More specifically, it is about the semantics and logic of natural language; and, even more specifically than that, it is about a particular way of dealing with those subjects, known as Discourse Representation Theory, or DRT. DRT is an approach towards natural language semantics which, some thirteen years ago, arose out of attempts to deal with two distinct problems. The first of those was the semantic puzzle that had been brought to contempo­ rary attention by Geach's notorious "donkey sentences" - sentences like If Pedro owns some donkey, he beats it, in which the anaphoric connection we perceive between the indefinite noun phrase some donkey and the pronoun it may seem to conflict with the existential meaning of the word some. The second problem had to do with tense and aspect. Some languages, for instance French and the other Romance languages, have two morphologically distinct past tenses, a simple past (the French Passe Simple) and a continuous past (the French Imparfait). To articulate precisely what the difference between these tenses is has turned out to be surprisingly difficult.