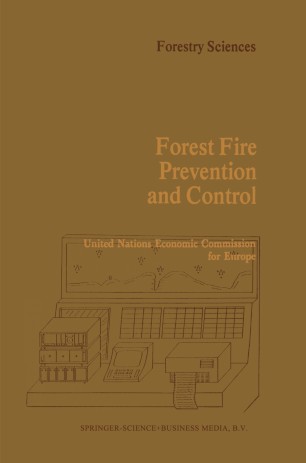 Proceedings of an International Seminar organized by the Timber Committee of the United Nations Economic Commission for Europe Held at Warsaw, Poland, at the invitation of the Government of Poland 20 to 22 May 1981

Tran Van Nao (Editor) The last decade has witnessed a seriously increasing incidence of forest fires in many countries. Substantial economic and ecological losses have been incurred, although the estimation of total damage This has been due to the lack assessment has often been inaccurate. of standardized methods for collecting data on fire occurrence and area burnt, as well as information such as the value of the vegetation destroyed and restoration costs, and the implications for recreation, tourism and other social activities. The Mediterranean region was initially considered one of the most vulnerable to forest fires because of its' dry climate and strong winds. No region is immune to forest fires, however, and damage has been especially severe in areas where pine is the predominant species. Although forest fires are normally considered a national problem, they become an international one when they occur in border area forests or when the ecological impacts are felt over long distances. The potential for forest fires exists in every country -unless it is a complete desert - and for this reason, there is a need to promote better understanding of the fires, and closer cooperation between countries in controlling them.