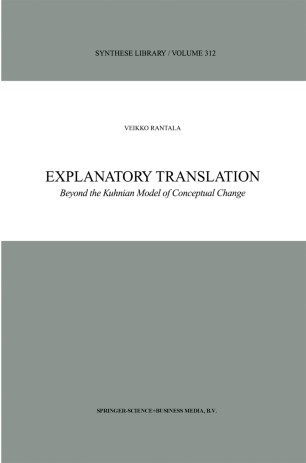 Beyond the Kuhnian Model of Conceptual Change

In this book, Veikko Rantala makes a systematic attempt to understand cognitive characteristics of translation by bringing its logical, pragmatic and hermeneutic features together and examining a number of scientific, logical, and philosophical applications. The notion of translation investigated here is called explanatory, but it is not a translation in the standard sense of the word since it admits of conceptual change. Such translations can take various degrees of precision, and therefore they can occur in contexts of different kinds: from everyday discourse to literary texts to scientific change. The book generalizes some earlier approaches to translation, especially the one presented in David Pearce's monograph Roads to Commensurability. Rantala argues that the notion has something in common with Thomas Kuhn's earlier conception of scientific change and his views of language learning, but it can be used to go beyond Kuhn's well-known ideas and challenge his criticism concerning the import of the correspondence relation.