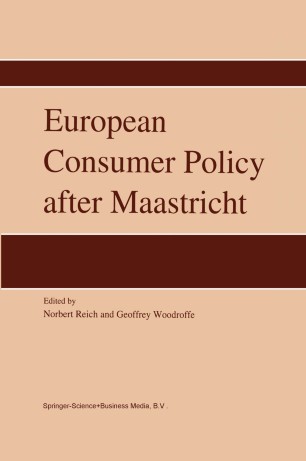 European Consumer Policy after Maastricht raises both `horizontal' and `vertical' issues of consumer policy in the European Community and associated countries. The work was prompted by three important `constitutional' events in Europe: the completion of the Internal Market on 31 December 1992, the adoption of the Maastricht Treaty on Political Union, and the conclusion of the Agreement on the European Economic Area (EEA).
The `horizontal' papers in Part I are concerned both with analyzing the `acquis' of consumer policy in Europe and with new directions as well as obstacles. The keynote paper by Micklitz and Weatherill gives an overall analysis of the political and legal bases of consumer policy from both the Internal Market and the Political Union perspectives. It is followed by two papers on subsidiarity by Gibson and Dahl which take up and clarify a somewhat confusing and irritating discussion in the EC. Lothar Maier is concerned with the function and role of the Consumer's Consultative Council in the EC of which he is the President; Monique Goyens with the opportunities and especially the shortcomings of consumer interest lobbying in the EC by her association, BEUC. The papers by Schmitz, Micklitz, Wilhelmsson and Krämer raise controversial and still unresolved policy and legal issues which go beyond traditional consumer policy via directives, e.g. in commercial marketing, cross-border litigation, contract law matters and conflicts between consumer and conflicts between consumer and environmental policy.
Part II is concerned with national perspectives. The individual country reports relate to the EC and EEA countries and to Switzerland. They document the diverse -- sometimes protective, sometimes disturbing -- impact of EC lawmaking on national legislation, court practice and enforcement. They demonstrate that law harmonization is a painstaking process towards the goal of creating a European legal area with common protective standards.