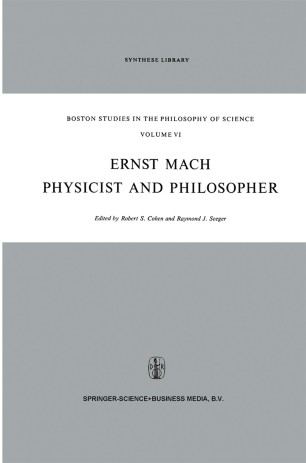 Part of the Boston Studies in the Philosophy of Science book series (BSPS, volume 6)

At the annual meeting of the American Association for the Advancement of Science in Washington, D.C., 27 December 1966, a symposium was held to commemorate the 50th anniversary of the death of Ernst Mach, the physicist who was vitally concerned about philosophical foundations. It was arranged by Section B on Physics, and co-sponsored by Section L on the History and Philosophy of Science, as well as by the History of Science Society. Dr. Allen W. Astin, Vice-President of the Association and Director of the National Bureau of Standards, presided. Representing the Austrian ambassador, Dr. Ernst Lemberger, a few opening remarks on his behalf were made by Dr. Walter Hietsch. Also present was Dr. Ernest A. Lederer, a grandson of Ernst Mach. The contributors, to the symposium, mostly physicists, represented different backgrounds and differing points of view; they presented their review of Mach's work primarily in the light of subsequent developments. They all, however, share a common interest in the life and works of Ernst Mach. Two of them, Otto BlUh and Peter G. Bergmann, received their doctoral degrees in theoretical physics from the University of Prague. Karl Menger received his doctoral degree in mathematics from the University of Vienna (he is responsible for the latest edition [1960] of Mach's celebrated The Science of Mechanics: A Critical and Historical Account of its Development, for which he prepared a new Introduction).