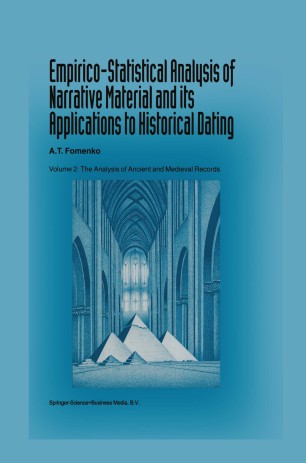 Volume II: The Analysis of Ancient and Medieval Records

We present certain empirico-statistical methods for the analysis of narrative and nu­ merical data extracted from different texts of historical character such as chronicles or annals. They are based on several statistical principles worked out by the author, and originally reported at the Third International Vilnius Conference on Probability Theory and Mathematical Statistics in 1981. The principal results were published in the papers [15]-[32], [293]-[299], [304]-[319] and in the book: A. T. Fomenko, Methods for Statistical Analysis of Narrative Texts and Applications to Chronol­ ogy, Moscow Univ. Press, Moscow, 1990 (in Russian). See also Part 1. The methods are applied to the problem of correct dating of the events in ancient and medieval history. These results induce conjectures on the redating of some important ancient historical events. Generally speaking, we might say that the commonly accepted "Modern Text­ book" of ancient and medieval European, Mediterranean, Egyptian and Middle Eastern history is a fibered (layered) chronicle obtained by gluing together four nearly identical copies of a shorter "original" chronicle. The other three chronicles are obtained from the "original" chronicle by redating and renaming the events de­ scribed in them; we rigidly move the "original" chronicle in its entirety backwards in time by approximately 333, 1053 and 1778 years. Thus, the full "Modern Textbook" can be reconstructed from its smaller part, namely from the "original" chronicle for the 9-17th cc. A.D. See Appendix 1, Figs. 101-104.