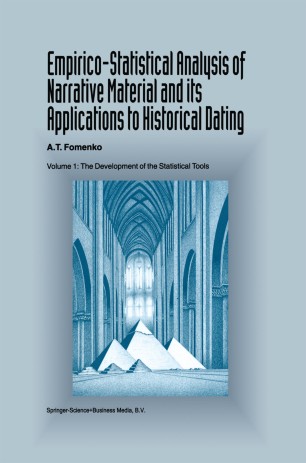 Volume I: The Development of the Statistical Tools

Today the methods of applied statistics have penetrated very different fields of knowledge, including the investigation oftexts ofvarious origins. These "texts" may be considered as signal sequences of different kinds, long genetic codes, graphic representations (which may be coded and represented by a "text"), as well as actual narrative texts (for example, historical chronicles, originals, documents, etc. ). One ofthe most important problems arising here is to recognize dependent text, i. e. , texts which have a measure of "resemblance", arising from some kind of "common origin". For instance, in pattern-recognition problems, it is essential to identify from a large set of "patterns" a pattern that is "closest" to a given one; in studying long signal sequences, it is important to recognize "homogeneous subsequences" and the places of their junction. This includes, in particular, the well-known change-point prob lern, which is given considerable attention in mathematical statistics and the theory of stochastic processes. As applied to the study of narrative texts, the problern of recognizing depen­ dent and independent texts ( e . g. , chronicles) Ieads to the problern offinding texts having a common source, i. e. , the sameoriginal (such texts are naturally called dependent), or, on the contrary, having different sources (such texts are natu­ rally called independent). Clearly, such problems are exceedingly complicated, and therefore the appearance of new empirico-statistical recognition methods which, along with the classical approaches, may prove useful in concrete studies (e. g. , source determination) is welcome.