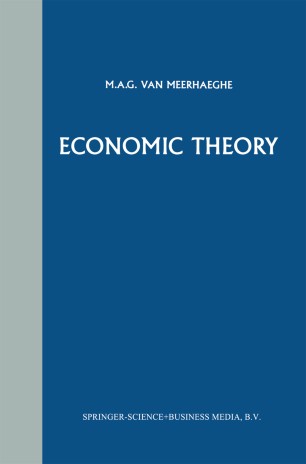 The content of this book formed part of an introduction to economics. Weidenfeld and Nicolson published an english translation in 1971: Econ- ics. A critical approach. Since several colleagues thought that the critical comments on various theories might discourage students, I divided this introduction into two parts. Were as the first part deals with economic theory as such, the present publication contains the subject matter of the second part, namely the former appraisal sections. The first edition benefited from comment by Professor P. Hennipman, who, although I took his comment into consideration as far as possible, did not always share my views. The appendix to the first edition (Economic Doctrines) has been omitted. I have used brief portions of it in a new chapter, 'Economic doctrines and economic policy'. I have added a chapter entitled 'Economic theory and economic policy' and brought up to date the other chapters. This book has no intention of instructing fellow economists. It is intended as a complement to an introductory course on economics, which for the most part does not deal systematically with (or is even totally lacking in) critical comments. Many economists consider any criticism of economic theory to be a form of lese-majeste. On the other hand, a critical approach should not be the monopoly of left-wing authors.