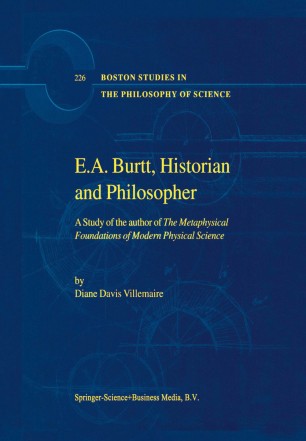 Part of the Boston Studies in the Philosophy of Science book series (BSPS, volume 226)

Burtt's book, The Metaphysical Foundations of Modern Physical Science, is something of a puzzle within the context of twentieth-century intellectual history, especially American intellectual history. Burtt's pioneering study of the scientific revolution has proved to prophetic in its rejection of both scientism and positivism. Published in 1924, Burtt's book continues to be read in educated circles and remains both the rose and the thorn on university reading lists, raising skeptical questions about science methods and science knowledge just as it did seventy-five years ago.
This book examines Burtt's public, academic and personal life. From his politics of conscience after World War I on through the Cold War Burtt is shown to be a man of unparalleled integrity, whose relentless search for philosophic understanding drove his more quixotic philosophical quests and steered his personal life, including its tragic dimension, toward simple virtue.
The many who have been affected by The Metaphysical Foundations will be especially interested in this new perspective on the life and thought of its author. Those who have not read Burtt's books might be inspired to study this unusual American thinker.