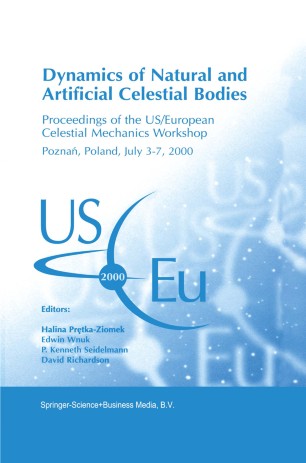 This volume contains papers presented at the US/European Celestial Mecha­ nics Workshop organized by the Astronomical Observatory of Adam Mickiewicz University in Poznan, Poland and held in Poznan, from 3 to 7 July 2000. The purpose of the workshop was to identify future research in celestial mech­ anics and encourage collaboration among scientists from eastem and westem coun­ tries. There was a full program of invited and contributed presentations on selected subjects and each day ended with a discussion period on a general subject in celestial mechanics. The discussion topics and the leaders were: Resonances and Chaos-A. Morbidelli; Artificial Satellite Orbits-K. T. Alfriend; Near Earth Ob­ jects - K. Muinonen; Small Solar System Bodies - I. Williams; and Summary - P. K. Seidelmann. The goal of the discussions was to identify what we did not know and how we might further our knowledge. The size of the meeting and the language differences somewhat limited the real discussion, but, due to the excellence of the different discussion leaders, each of these sessions was very interesting and productive. Celestial Mechanics and Astrometry are both small fields within the general subject of Astronomy. There is also an overlap and relationship between these fields and Astrodynamics. The amount of interaction depends on the interest and efforts of individual scientists.