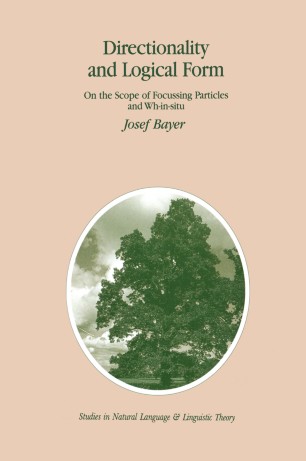 On the Scope of Focusing Particles and Wh-in-situ

Directionality and Logical Form provides a detailed treatment of the syntax of focusing particles, such as only and even in a cross-linguistic perspective. The derivation of logical forms is shown to be under the control, not only of the ECP and subjacency, but also of directionality of government and the particular word-order parameter that holds in a given language: head-final languages systematically disallow certain derivations or readings that are available in head-initial languages. The reason is that heads that deviate in their selection properties from canonical head-finality project a directionality barrier. Various strategies are explored by which this barrier can be circumvented. Although the theory is developed mainly on the basis of the head position in German, it can be directly used to explain constraints on the scope of Wh-in-situ in Bengali and closely related languages.
Audience: Syntacticians and semanticists interested in parametric variation, as well as linguists working on Germanic and/or Indo-Aryan languages.