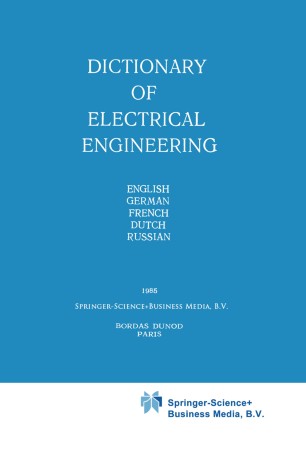 The purpose of this Dictionary, published jointly by «Kluwer Technische Boeken, BV» (Deventer, The Netherlands) and «Russky yazyk Publishers» (Moscow, USSR) is to help the user read and translate Englisch, German, French, Dutch and Russian texts in electrical engineer­ ing. Up until now all such dictionaries were containing terms pertaining directly to electrical engineering plus the terminology used in its off-sheets which have evolved into separate disci­ plines, such as communications, electronics, automation etc. Foremost, however, this Diction­ ary represents the terminology of electrical engineering, while the branches are represented by their basic terms only. Given the relative small volume (about 8000 terms), the authors tried to reflect the most important terms in such areas as the cirquit theory, electric and magnetic measurements, ele­ ctric power generation, transmission and distribution, as well as the industrial and domestic consumption of electric power. The Dictionary also contains many terms relevant to high voltage technology, electrical machines and apparatus, electric drive, as well as to the elements and structures of aerial and cable transmission lines. In selecting English terms, the authors were trying to reflect both their British and Ameri­ can versions, although they did not attempt to present all terminological synonyms of this kind. In some cases the Dictionary provides the main spelling versions.