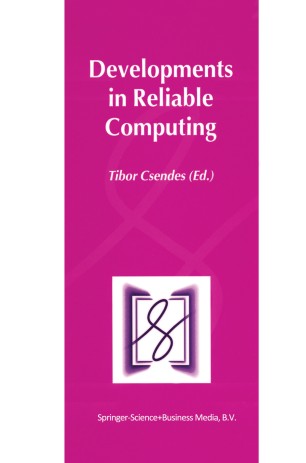 The SCAN conference, the International Symposium on Scientific Com­ puting, Computer Arithmetic and Validated Numerics, takes place bian­ nually under the joint auspices of GAMM (Gesellschaft fiir Angewandte Mathematik und Mechanik) and IMACS (International Association for Mathematics and Computers in Simulation). SCAN-98 attracted more than 100 participants from 21 countries all over the world. During the four days from September 22 to 25, nine highlighted, plenary lectures and over 70 contributed talks were given. These figures indicate a large participation, which was partly caused by the attraction of the organizing country, Hungary, but also the effec­ tive support system have contributed to the success. The conference was substantially supported by the Hungarian Research Fund OTKA, GAMM, the National Technology Development Board OMFB and by the J6zsef Attila University. Due to this funding, it was possible to subsidize the participation of over 20 scientists, mainly from Eastern European countries. It is important that the possibly first participation of 6 young researchers was made possible due to the obtained support. The number of East-European participants was relatively high. These results are especially valuable, since in contrast to the usual 2 years period, the present meeting was organized just one year after the last SCAN-xx conference.