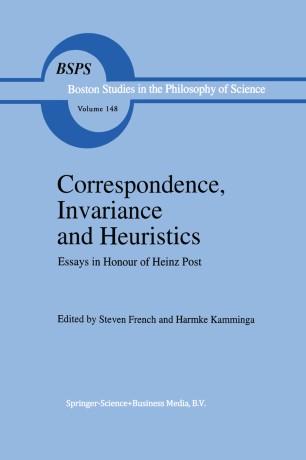 Part of the Boston Studies in the Philosophy of Science book series (BSPS, volume 148)

This volume is presented in honour of Heinz Post, who founded a distinc­ tive and distinguished school of philosophy of science at Chelsea College, University of London. The 'Chelsea tradition' in philosophy of science takes the content of science seriously, as exemplified by the papers presented here. The unifying theme of this work is that of 'Correspondence, Invariance and Heuristics', after the title of a classic and seminal paper by Heinz Post, published in 1971, which is reproduced in this volume with the kind permission of the editors and publishers of Studies in History and Philosophy of Science. Described by Paul Feyerabend in Against Method as "brilliant" and " . . . a partial antidote against the view which I try to defend" (1975, p. 61, fn. 17), this paper, peppered with illustrative examples from the history of science, brings to the fore some of Heinz Post's central concerns: the heuristic criteria used by scientists in constructing their theories, the intertheoretic relationships which these criteria reflect and, in particular, the nature of the correspondence that holds between a theory and its predecessors (and its suc­ cessors). The appearance of this volume more than twenty years later is an indica­ tion of the fruitfulness of Post's contribution: philosophers of science continue to explore the issues raised in his 1971 paper.