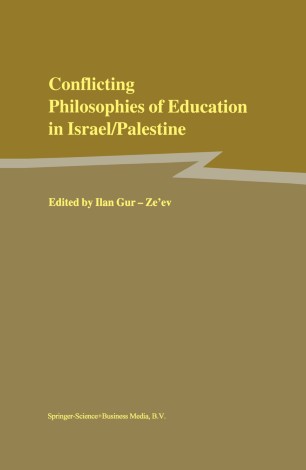 Conflicting Philosophies of Education in Israel/Palestine

effectiveness and creativity in different contexts. In this issue this will be presented in full detail in the articles which refer to different aspects of the Israeli educational context. This special issue of Studies in Philosophy and Education concentrates on the intellectual impotence, moral devotion, cultural willingness and social and techno­ logical efforts for the preservation and enhancement of the tyranny of normalizing education over human beings in a specific arena. The various studies in this issue, with all their differences of orientation and issues under consideration, will recon­ struct the ways for forcing subjects and communities to commit themselves to destroy the otherness - or the human potential - of the inner and external Other. They reveal this phenomenon as a characteristic of both the victimizers and their 8 victims. Normally philosophy of education supports this process and justifies or hides this reality. As will be shown in this special issue, however, at the same time philosophy of education might also become a non-productive or even a rebellious element in the culture industry and present a serious challenge to the present order. It can address and challenge the perpetual success of normalizing education, in all its versions, among all rival communities, narratives and armies of teachers, consumers, soldiers, and intellectuals. This, of course, does not guarantee that such a critique or resistance will not become another dogmatic or nihilistic blow to the free Spirit, or nothing but another version of normalizing education.