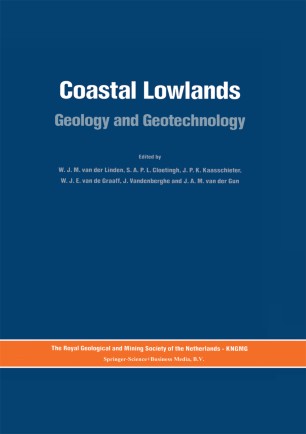 Coastal Lowlands by virtue of their position across the boundary of land and sea belong to the earth's most dynamic systems. This is true in the physical, i. e. geological and biological, as much as in the cultural and social sense. Although the nearness to the sea was and still is fraught with danger coastal lowlands have always attracted human interest, providing challenging opportunity, holding the promise of profitable enterprise. Coastal lowlands, especially where rivers enter the region, are the cradles of great civilisations and there, of old, populations reached highest densities. As an example, Dutch history is a tale of human struggle and endeavour with and against the sea. Dutch 'low landers' wrestled their land from the sea, in turn the sea forged a nation of independent fishermen, navigators, farmers and traders who built their towns and ships at the borders of the North and Zuyder Seas. As lowlands subside and sea level rises, apparently these days at an increasing rate, concern about this environment world-wide is also rising. It certainly was appropriate and timely for the Royal Geological and Mining Society of the Netherlands when celebrating its 75th birthday to organize and call together a symposium, focussing attention on the geology and geotechnology of coastal lowlands; geology to better understand their formation and evolution, geotechnology to better manage and harvest resources as much as protect a unique and crucial environment.