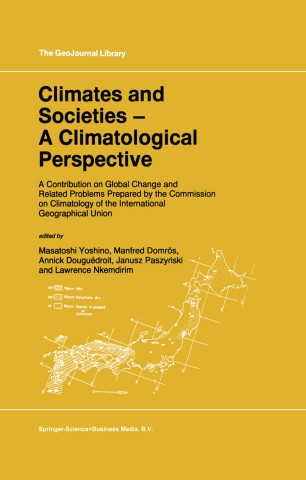 Climates and Societies — A Climatological Perspective

Part of the The GeoJournal Library book series (GEJL, volume 36)

The impact of climate on human activities and the effect of humans on cli­ mate are two of the most important areas of inquiry in climatology. These interactions conducted through physical, chemical and biological process­ es were described as early as Roman and Greek times. Marcus Vitruvius (75-25 B. C. ), a famous Roman engineer and architect, made the following observation about the climatic conditions necessary for founding a city: Land ideal for the health is slightly elevated and there should be neither fog nor frost. The direction of the slope and the distance to the swamps, lakes, and beaches must also be considered. The prevailing wind directions, observed by a wind tower at the center of the city, like Horologium at Athens, should be taken into consideration in city planning. The main and narrow streets should be placed in the middle angle of the two prevailing wind directions. Then the location of the Pantheons and squares should be decided. The influence of humans on climate was a major subject for discussion in the 19th century, inspired in part, by the rapid industrial growth and expanding deforestation of the time. D. L. Howard wrote brilliant pieces on the climate of London in the 1830s, while G . P. Marsh discussed the effects of forests on precipitation in the U. S . A. in the second half of the 19th century.