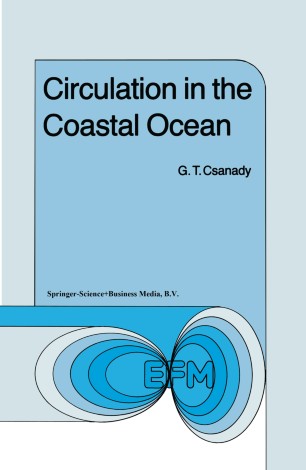 Circulation in the Coastal Ocean

For some time there has existed an extensive theoretical literature relating to tides on continental shelves and also to the behavior of estuaries. Much less attention was traditionally paid to the dynamics of longer term, larger scale motions (those which are usually described as circulation') over continental shelves or in enclosed shallow seas such as the North American Great Lakes. This is no longer the case: spurred on by other disciplines, notably biological oceanography, and by public concern with the environment, the physical science of the coastal ocean has made giant strides during the last two decades or so. Today, it is probably fair to say that coastal ocean physics has come of age as a deduc­ tive quantitative science. A well developed body of theoretical models exist, based on the equations of fluid motion, which have been related to observed currents, sea level variations, water properties, etc. Quantitative parameters required in using the models to predict e.g. the effects of wind or of freshwater influx on coastal currents can be estimated within reasonable bounds of error. While much remains to be learned, and many exciting discoveries presumably await us in the future, the time seems appropriate to summarize those aspects of coastal ocean dynamics relevant to 'circulation' or long­ term motion.