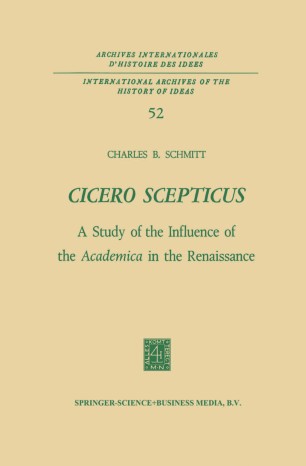 A Study of the Influence of the Academica in the Renaissance

As originally planned this volume was meant to cover a somewhat wider scope than, in fact, it has turned out to do. When, in rg68, I initially conceived of preparing it, it was proposed to deal with several aspects of early modern scepticism, in addition to the fortuna of the Academica, and to publish various loosely related pieces under the title of 'Studies in the History of Early Modern Scepticism. ' Thereby, I foresaw that I would exhaust my knowledge of the subject and would then be able to turn my attention to other matters. In initiating my research on this topic, however, I soon found that there remained a much greater bulk of material to study than could possibly be dealt with between the covers of the single modest volume which I envisioned. My proposed section on Cicero's Academica was to cover between 50 and 75 pages in the original plan. It soon became apparent, however, especially after Joannes Rosa's hitherto unstudied commentary on Cicero's work was uncovered, that this material would have to be treated at a much greater length than I had foreseen. The present volume is the result of this expanded investigation. The monograph which has come from this alteration in plans has, I think, the virtues of continuity and cohesive­ ness and one hopes that these advantages offset the benefits of a broader scope which were sacrificed.