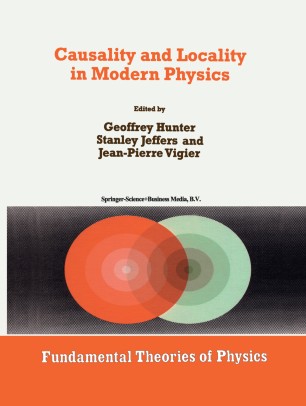 Causality and Locality in Modern Physics

Proceedings of a Symposium in honour of Jean-Pierre Vigier

The Symposium entitled: Causality and Locality in Modern Physics and As­ tronomy: Open Questions and Possible Solutions was held at York University, Toronto, during the last week of August 1997. It was a sequel to a similar sym­ posium entitled: The Present Status of the Quantum Theory of Light held at the same venue in August 1995. These symposia came about as a result of discussions between Professor Stanley Jeffers and colleagues on the International Organizing Committee. Professor Jeffers was the executive local organizer of the symposia. The 1997 symposium attracted over 120 participants representing 26 different countries and academic institutions. The broad theme of both symposia was the enigma of modern physics: the non-local, and possibly superluminal interactions implied by quantum mechanics, the structure of fundamental particles including the photon, the reconciliation of quantum mechanics with the theory of relativity, and the nature of gravity and inertia. Jean-Pierre Vigier was the guest of honour at both symposia. He was a lively contributor to the discussions of the presentations. The presentations were made as 30-minute lectures, or during an evening poster session. Some participants did not submit a written account of their presentation at the symposium, and not all of the articles submitted for the Proceedings could be included because of the publisher's page limit. The titles and authors of the papers that had to be excluded are listed in an appendix.