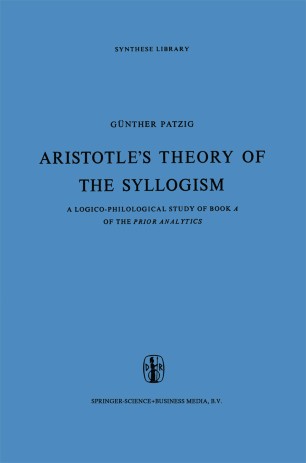 Aristotle’s Theory of the Syllogism

A Logico-Philological Study of Book A of the Prior Analytics

The present book is the English version of a monograph 'Die aristotelische Syllogistik', which first appeared ten years ago in the series of Abhand­ 1 lungen edited by the Academy of Sciences in Gottingen. In the preface to the English edition, I would first like to express my indebtedness to Mr. J. Barnes, now fellow of Oriel College, Oxford. He not only translated what must have been a difficult text with exemplary precision and ingenuity, but followed critically every argument and check­ ed every reference. While translating it, he has improved the book. Of those changes which I have made on Mr. Barnes' suggestion I note only the more important ones on pages 4, 12, 24sq, 32, 39, 6lsq, and 158. Since the second edition of the German text appeared in 1963 some further reviews have been published, or come to my notice, which I have 2 been able to make use of in improving the text of this new edition. I must mention here especially the detailed critical discussions of my results and arguments published by Professor W. Wieland in the Philosophische Rundschau 14 (1966), 1-27 and by Professor E. Scheibe in Gnomon 39 (1967), 454-64. Both scholars, while agreeing with the main drift and method of my interpretation, criticise some of my results and disagree with some of my arguments. It would not be possible to discuss these technical matters here with the necessary thoroughness.