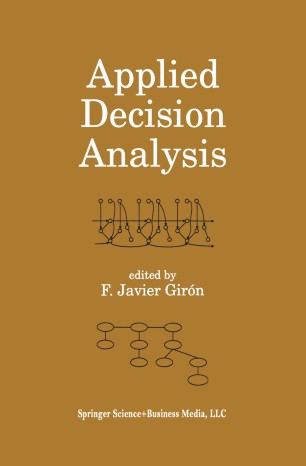 Taking advantage of the many specialists visiting Spain prior to the INFORMS Meeting in Barcelona, hold from July 14th to July 17th 1997, we organized a work­ shop on Decision Analysis Applications at the Real Academia de Ciencias, Madrid, Spain, from J uly 11th to 12th 1997, under the sponsorship of de the Instituto Espaiia. This workshop had a precedent in the International Conference Decision Making: Towards the 21st Century also held at the Real Academia de Ciencias in 1993. The idea of organizing an event, this time devoted to applications of Decision Analysis, was due to Prof. Sixto Rfos, who some four years ago, .sponsored and encouraged by the Royal Academy of Sciences, was the creator of an Interdisciplinary Working Group on Decision Analysis -formed with researchers from within and outside this Academy- which has been active since then, organizing periodical meetings, and whose last project has tumed out into this Workshop. The workshop turned out to be an stimulating opportunity for communicating and discussing the enormous variety of applications of Decision Sciences. In this volume we have included most of the invited papers and a selection of refereed contributed papers. Due to the varied nature of the applications, we have grouped them into five groups ending, as way of an epilog, with a paper by Sarin which contains important insights and reftections on the nature of Decision Analysis in public and private sectors.