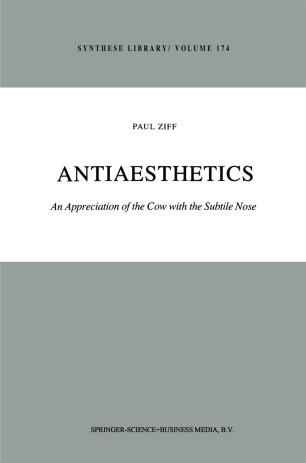 An Appreciation of the Cow with the Subtile Nose

Although various sections of this work have been published separately in various journals and volumes their separate publication is wholly attributable to the exigencies of life in academia: the work was devised as and is supposed to constitute something of an organic unity. Part II of 'The Cow with the Subtile Nose' was published under the title 'A Creative Use of Language' in New Literary History (Autumn, 1972), pp. 108-18. 'The Cow on the Roof' appeared in The Journal oj Philosophy LXX, No. 19 (November 8, 1973), pp. 713-23. 'A Fine Forehand' appeared in the Journal oj the Philosophy oj Sport, Vol. 1 (September, 1974), pp. 92-109. 'Quote: Judgements from Our Brain' appeared in Perspectives on the Philosophy oj Wittgenstein, ed. by I. Block (Oxford: Basil Blackwell, 1981), pp. 201-211. 'Art and Sociobiology' appeared in Mind (1981), Vol. XC, pp. 505-520. 'Anything Viewed'appeared in Essays in Honour oj Jaakko Hintikka, ed. by Esa Saarinen, Risto Hilpinen, Illkka Niiniluoto and Merrill Provence Hintikka (Dordrecht, Holland and Boston, Massachusetts: D. Reidel Publishing Co., 1979), pp. 285-293. 'How I See Philosophy' appeared in The Owl oj Minerva, ed. by C. J. Bontempo and S. Jack Odell (New York: McGraw-Hill Book Co., 1975), pp. 223-5. All the remaining parts are also forthcoming in various journals and volumes. I am grateful to Bradley E. Wilson for the preparation of the index.