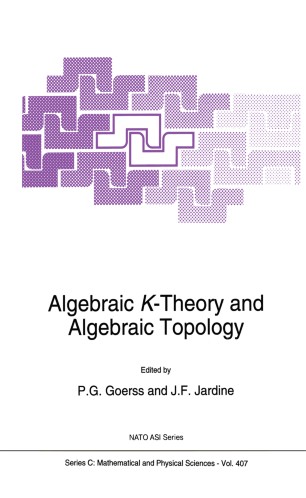 A NATO Advanced Study Institute entitled "Algebraic K-theory and Algebraic Topology" was held at Chateau Lake Louise, Lake Louise, Alberta, Canada from December 12 to December 16 of 1991. This book is the volume of proceedings for this meeting. The papers that appear here are representative of most of the lectures that were given at the conference, and therefore present a "snapshot" of the state ofthe K-theoretic art at the end of 1991. The underlying objective of the meeting was to discuss recent work related to the Lichtenbaum-Quillen complex of conjectures, fro~ both the algebraic and topological points of view. The papers in this volume deal with a range of topics, including motivic cohomology theories, cyclic homology, intersection homology, higher class field theory, and the former telescope conjecture. This meeting was jointly funded by grants from NATO and the National Science Foun­ dation in the United States. I would like to take this opportunity to thank these agencies for their support. I would also like to thank the other members of the organizing com­ mittee, namely Paul Goerss, Bruno Kahn and Chuck Weibel, for their help in making the conference successful. This was the second NATO Advanced Study Institute to be held in this venue; the first was in 1987. The success of both conferences owes much to the professionalism and helpfulness of the administration and staff of Chateau Lake Louise.