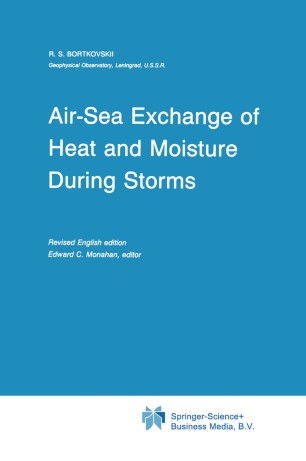 Air-Sea Exchange of Heat and Moisture During Storms

Scientists investigating the interaction between the ocean and the atmosphere now believe that the drag coefficient, and the coefficients of heat transfer and moisture transfer at the sea surface, all increase with an intensification of the wind, reaching high values during a storm. This belief is based on the results of gradient and eddy correlation measurements in the air layer over the water, as weIl as on data concerning the effect of storms on the structure of the upper layer of the ocean and on the planetary atmospheric boundary layer. However, until recently it was impossible to explain just how the above coefficients depend on the wind velocity and to extrapolate this dependence into the region of hurricane velocities. Only by studying nonturbulent mechanisms of transfer, which play an important role dose to the surface of a stormy sea, and mechanisms of spray­ mediated transfer in particular, was it possible to proceed to a solution of this problem. This book presents the results of laboratory and field studies of the spray field in the air layer above the surface of a stormy sea. Since there is a dose correlation between the generation of spray and the breaking of wind waves, considerable attention is given to the analysis of data on the sea state during a storm. Su'ch data are of interest when solving a number of diverse theoretical and applied problems.