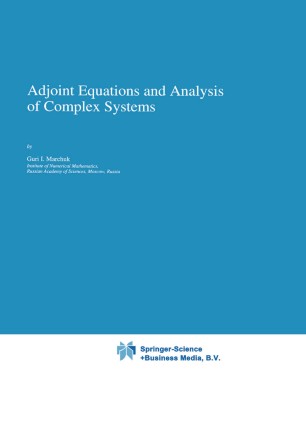 Part of the Mathematics and Its Applications book series (MAIA, volume 295)

New statements of problems arose recently demanding thorough ana­ lysis. Notice, first of all, the statements of problems using adjoint equations which gradually became part of our life. Adjoint equations are capable to bring fresh ideas to various problems of new technology based on linear and nonlinear processes. They became part of golden fund of science through quantum mechanics, theory of nuclear reactors, optimal control, and finally helped in solving many problems on the basis of perturbation method and sensitivity theory. To emphasize the important role of adjoint problems in science one should mention four-dimensional analysis problem and solution of inverse problems. This range of problems includes first of all problems of global climate changes on our planet, state of environment and protection of environ­ ment against pollution, preservation of the biosphere in conditions of vigorous growth of population, intensive development of industry, and many others. All this required complex study of large systems: interac­ tion between the atmosphere and oceans and continents in the theory of climate, cenoses in the biosphere affected by pollution of natural and anthropogenic origin. Problems of local and global perturbations and models sensitivity to input data join into common complex system.