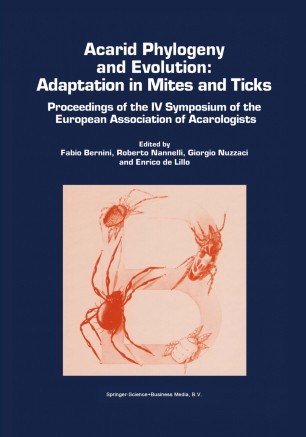 Acarid Phylogeny and Evolution: Adaptation in Mites and Ticks

Proceedings of the IV Symposium of the European Association of Acarologists

The words pronounced by Serge Kreiter during the meeting come to mind. They could record exactly the situation of Acarology in Europe and in the World: "I think that in many European countries there are very few full time acarologists. It is very rare to have new positions available . . . . And public money, from the European Community but also from national countries, is very hard to get when you want to work on mites . . . . Could two acarological associations in Europe (Eur. A. Ac. and S. I. A. L. F) work together or, better, get married?" So, the fourth symposium of the European Acarologists has not only been the occasion to have an idea on which direction the research is addressed today, but also it pointed out the difficulties of our "scientific hranch". On the basis of the presentations and invited papers we had evidences of a "new" Acarology based on modern techniques and methods of investigations but also the importance, often sheltered even if of relevant value, of the "old" Acarology made on the alpha taxonomy and basic studies. So, a "new" Acarology needs the "old" one. In this context, the hope to put together the European acarologists has been coming up. This fact, of political meaning, can surely improve the acarological movement and the discussion on this point showed clearly the importance of several other activities and efforts in this direction. We hope that the meeting in Siena will represent a significative stone for the progress of Acarology.