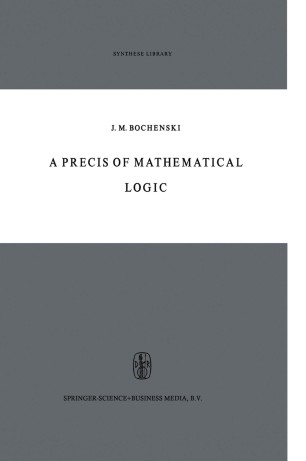 A Precis of Mathematical Logic

The work of which this is an English translation appeared originally in French as Precis de logique mathematique. In 1954 Dr. Albert Menne brought out a revised and somewhat enlarged edition in German (Grund­ riss der Logistik, F. Schoningh, Paderborn). In making my translation I have used both editions. For the most part I have followed the original French edition, since I thought there was some advantage in keeping the work as short as possible. However, I have included the more extensive historical notes of Dr. Menne, his bibliography, and the two sections on modal logic and the syntactical categories (§ 25 and 27), which were not in the original. I have endeavored to correct the typo­ graphical errors that appeared in the original editions and have made a few additions to the bibliography. In making the translation I have profited more than words can tell from the ever-generous help of Fr. Bochenski while he was teaching at the University of Notre Dame during 1955-56. OTTO BIRD Notre Dame, 1959 I GENERAL PRINCIPLES § O. INTRODUCTION 0. 1. Notion and history. Mathematical logic, also called 'logistic', ·symbolic logic', the 'algebra of logic', and, more recently, simply 'formal logic', is the set of logical theories elaborated in the course of the last century with the aid of an artificial notation and a rigorously deductive method.