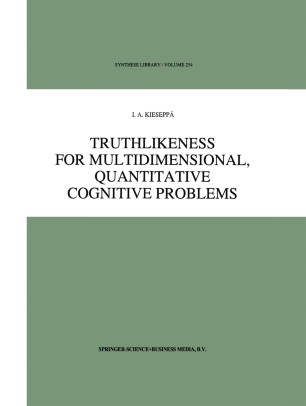 Philosophers of science have produced a variety of definitions for the notion of one sentence, theory or hypothesis being closer to the truth, more verisimilar, or more truthlike than another one. The definitions put forward by philosophers presuppose at least implicitly that the subject matter with which the compared sentences, theories or hypotheses are concerned has been specified,! and the property of closeness to the truth, verisimilitude or truth likeness appearing in such definitions should be understood as closeness to informative truth about that subject matter. This monograph is concerned with a special case of the problem of defining verisimilitude, a case in which this subject matter is of a rather restricted kind. Below, I shall suppose that there is a finite number of interrelated quantities which are used for characterizing the state of some system. Scientists might arrive at different hypotheses concerning the values of such quantities in a variety of ways. There might be various theories that give different predictions (whose informativeness might differ , too) on which combinations of the values of these quantities are possible. Scientists might also have measured all or some of the quantities in question with some accuracy. Finally, they might also have combined these two methods of forming hypotheses on their values by first measuring some of the quantities and then deducing the values of some others from the combination of a theory and the measurement results.