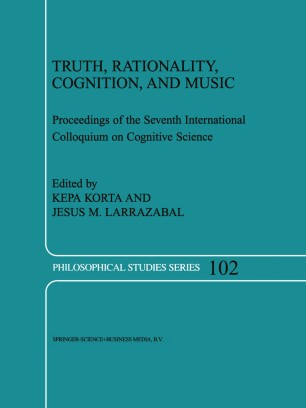 Proceedings of the Seventh International Colloquium on Cognitive Science

A speech for the defence in a Paris murder trial, a road-safety slogan, Hobbes' political theory; each appeals to reason of a kind, but it remains an oblique and rhetoricalldnd. Each relies on comparisons rather than on direct statements, and none can override or supersede the conclusions of ethical reasoning proper. Nevertheless, just as slogans may do more for road safety than the mere recital of accident statistics, or of the evidence given at coroners' inquests, so the arguments of a Hobbes or a Bentham may be of greater practical effect than the assertion of genuinely ethical or political statements, however true and relevant these may be. Stephen Toulmin, Reason in Ethics, 1950. The International Colloquium on Cognitive Science (ICCS), held in Donostia - San Sebastian every two years since 1989, has become one of the most important plazas for cognitive scientists in Europe to present the results of their research and to exchange ideas. The seventh edition, co-organized as usual by the Institute for Logic, Cognition, Language, and Information (ILCLI) and the Department of Logic and Philosophy of Science, both from the University of the Basque Country, took place from May 9 to 12, 200 1, addressing the following main topics: 1. Truth: Epistemology and Logic. 2. Rationality in a Social Setting. 3. Music, Language, and Cognition. Vlll TRUTH, RATIONALITY, COGNITION, AND MUSIC 4. The Order of Discourse: Logic, Pragmatics, and Rhetoric.