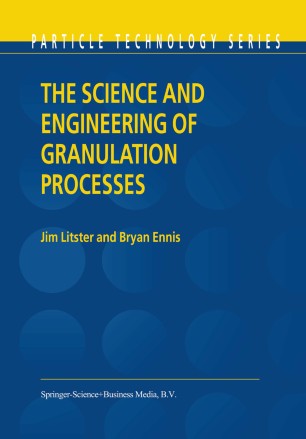 The Science and Engineering of Granulation Processes

This book had its origins in a meeting between two (relatively) young particle technology researchers on Rehobeth Beach in Delaware in 1992 near the holiday house of Reg Davies (then Director of the Particle Science and Technology Research Center in Dupont). As we played in the sand, we shared an excitement for developments in particle technology, especially particle characterization, that would lead operations such as granulation to be placed on a sound scientific and engineering footing. The immediate outcome from this interaction was the development of new industry short courses in granulation and related topics which we taught together both in Australia and North America. This book follows closely the structure and approaches developed in these courses, particularly the emphasis on particle design in granulation, where the impact of both formulation properties and process variables on product attributes needs to be understood and quantified. The book has been a long time in the making. We have been actively preparing the book for at least five years. Although the chapters have relatively good bibliographies, this book is not a review of the field. Rather it is an attempt by the authors to present a comprehensive engineering approach to granulator design, scale up and operation. It is exciting for us to see the explosion of research interest around the world in this area in the last five to seven years. Some of the most recent work will have to find its way into the second edition.