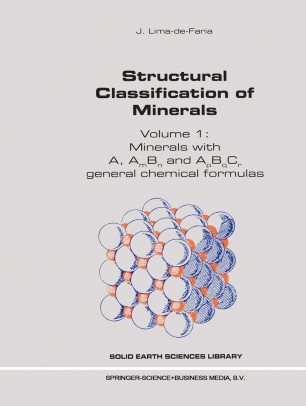 Volume I: Minerals with A, Am Bn and ApBqCr General Chemical Formulas

In his foreword to Structural Mineralogy. An classification was taken into account. The first Introduction (Lima-de-Faria, 1994) P.B. Moore classification of this type, which takes into con­ emphasized that this book "is really not an end in sideration the distribution of bonds in a structure, itself. Rather it is a rallying call to urge further was that of silicates proposed by Machatschki clarification, representation and systematization (1928) and developed by Bragg (1930) and Naray­ of already known structures". If we consider the Szabo (1930). new book by Lima-de-Faria, Structural Classi­ The pure structural classification of minerals fication of Minerals, in this context, we can ask was first proposed by J. Lima-de-Faria in 1983. It corresponds to the application of the general what kind of new mineralogical data it contains. The twentieth century was characterized by structural classification of inorganic compounds great progress in the study of minerals. Less than (Lima-de-Faria & Figueiredo, 1976) to minerals, 100 minerals were known up until 1800. Since that which are an integral part of them. The most time, the rate of discovery of new minerals is general approach of the structural systematics is steadily increasing. Now it is found that natural based on the analysis of the strength distribution processes select some 4000 mineral species, and and of the directional character of the bonds in this number is increasing by 50-60 minerals every crystal structures.