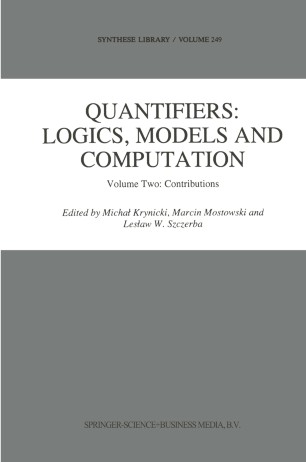 This volume contains a collection of research papers centered around the concept of quantifier. Recently this concept has become the central point of research in logic. It is one of the important logical concepts whose exact domain and applications have so far been insufficiently explored, especially in the area of inferential and semantic properties of languages. It should thus remain the central point of research in the future. Moreover, during the last twenty years generalized quantifiers and logical technics based on them have proved their utility in various applications. The example of natu­ rallanguage semantics has been partcularly striking. For a long time it has been belived that elementary logic also called first-order logic was an ade­ quate theory of logical forms of natural language sentences. Recently it has been accepted that semantics of many natural language constructions can­ not be properly represented in elementary logic. It has turned out, however, that they can be described by means of generalized quantifiers. As far as computational applications oflogic are concerned, particulary interesting are semantics restricted to finite models. Under this restriction elementary logic looses several of its advantages such as axiomatizability and compactness. And for various purposes we can use equally well some semantically richer languages of which generalized quantifiers offer the most universal methods of describing extensions of elementary logic. Moreover we can look at generalized quantifiers as an explication of some specific mathematical concepts, e. g.