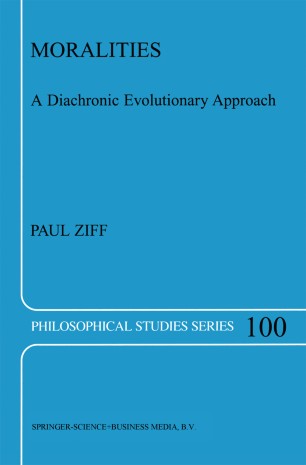 This essay is the product of years of distaste for, and dissatisfaction with, the efforts of moral philosophers. It can be tiresome to attend to details, to spell out the obvious, but moral philosophy is such an abysmally difficult subject that faster than a creeping slug is breakneck reckless speed. One simply must content oneself with a slow slimy trail painfully drawn and cautiously constrained. Generally speaking, philosophy, and, in particular, moral philosophy, is too hard fot philosophers. Even though publishing is spitting in the ocean, and even though my sour sweet spittle will not alter the ocean's salinity, I am somehow inclined to publish this essay. Acknowledgments: I began this essay in 1956. During the years, I have discussed many of the topics in this volume with a great many philosophers. I am indebted to all of them, especially those with whom I disagreed and those who disagreed with me. One learns nothing from agreement, whereas disagreement provokes one to look more closely and more carefully at what is at issue: if a philosopher is to profit from discussion, someone must be disagreeable.